Eric Bissell captured his first published image with Patagonia on a climbing trip to establish a new route on Mount Ololokwe.

We were on our way back from a resupply of water and beer at the dusty Archers Post when two camels crossed the A2 highway; they were framed by the mountain we had been climbing that rose out of the Kenya desert. JT pulled over, and we hopped out to snap a photo of the scene. I was told that the road had been dirt until recently and that Archers Post had been the northernmost piece of pavement in Kenya. Now, blacktop stretched north to Ethiopia and east to Somalia. I took my photo as the camel turned to look at me, and jumped back into the car to head to camp.

We were a team of four. This was my first time to Kenya and the Samburu, but Kate, Brittany and JT had come here the year before. Where I was wide-eyed and treading water in the uncomfortably new, they were retracing their steps with efficiency and purpose. The goal of the trip was to finish a route they had started on the steep, rusty-brown southwest face of Mount Ololokwe. Where they were seasoned in the art of the sweltering global climbing trip, I knew almost nothing. I did have a trip to Venezuela’s famous tepui under my belt from a couple of years prior, but that was a skin-of-the-teeth expedition with little contingency and a lot of luck, in contrast to the calculated planning that these three had developed. I was a child among adults. For one thing, I didn’t realise it was possible to have cell service abroad. Kate was gracious enough to let me send a few texts from her phone.

Being the youngest on the trip, I was determined to pull my weight climbing, to take photos and to learn a lot about traveling. Kate and Brittany are longtime Patagonia ambassadors, and for the past decades their travels have shaped the visual story of adventure climbing for the brand. In the past few years I had rediscovered a childhood passion for the camera and knew that having them as partners on the trip would help my images. I burned any potential profit on a long lens for my camera and a plane ticket, and then boarded a flight to Nairobi to join them.

We joke (with some truth) that driving to the crag is the most dangerous part of climbing. There’s nothing like an international expedition to blast that home. In Kenya, it’s right-hand drive, left-lane traffic. If you’ve never tried it, it’s like cutting your own hair in the mirror—something feels backward, but the consequences are more real. Nairobi to the Samburu region, where Mount Ololokwe sits, is about 350 km of fast-paced two-lane traffic with all the pitfalls of a scrolling Game Boy™ match. Homemade speed bumps fashioned from rocks covered with a long mound of red dirt, black-hole-sized potholes and giant freight trucks threaten to puncture, devour and squash you at any lapse in attention. 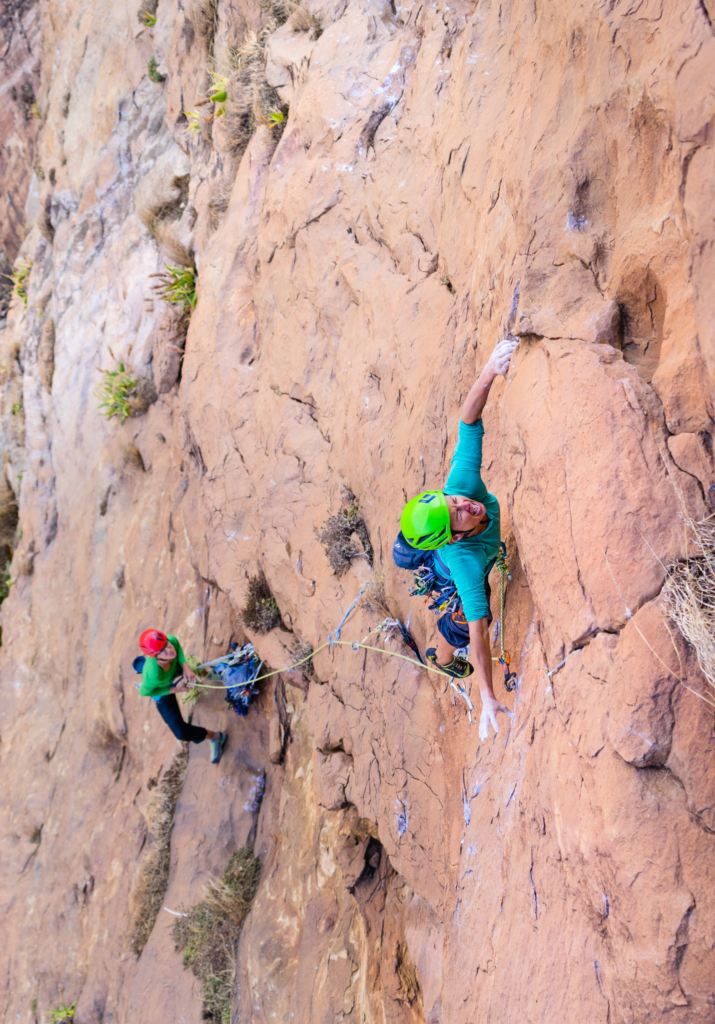 At supply stops in rural towns, we stared at our foreign whiteness in the reflection of the SUV’s dusty windows. Individual worlds moved and spun in their daily routines while we passed, separated by glass and steel and gasoline while people shook hands outside shops, sold fruit on the curb or caught my eye as I lifted the camera and took photo after photo. Colour was everywhere – in the bright buildings, the hand-painted signs and the intricately dressed and decorated motorbikes. Tassels hanging from handlebars squirmed in the wind as they passed by the window. A special forces British military base and ritzy safaris brought families of white foreigners to northern Kenya. Although we were neither of those things, we slipped into the space those two groups had carved through the country.

In the start-stop mix of arcade-style driving and resort hopping (at one point we poached an outdoor pool at a hotel full of khaki-clad tourists to wash the car sweat from our backs), we made our way to the Sabache Camp, our home for the two weeks on Ololokwe. My three partners hugged their friends and hosts from the year before, getting reacquainted. We set up in reed-roofed huts tucked into a beautiful, shady, green and glimmering red-dirt valley on the north side of Ololokwe. JT had arranged to leave equipment from the trip the year before, so between conversations we racked up for our attempt on the unfinished route.

Setting to work on the wall was ultimately anticlimactic. Unshakable sun dragged across the face at midday and threatened to curl the already friable, thin patina into a peeling painting of overbaked crimps. We never knew which ones would stay and which would smugly explode like a shaken can of White Claw. But besides the heat and sections of disposable holds, we pursued the route like a crushing deadline, and we worked hard to leave an approach that would excite other climbers and inspire them to explore the rest of the unclimbed face. We took deliberate care to weave between caves of birds whose hundred-foot streaks of guano could be seen from the paved road miles away. The climbing was good—challenging and intricate with wide variety between individual pitches. Roofs, slabs and corners connected in an unobvious line of least resistance up the sweeping steepness. At midday we napped under boulders on the top of the wall or under trees at the base to escape the heat. Commuter static lines allowed us to access the individual pitches we were figuring out and then get to shady safety as Ololokwe rotated into the fierce glare of the equatorial sun. Using fixed lines to establish the route wasn’t the best style. It was a compromise we employed in order to achieve the route we envisioned – safe and accessible for repeat attempts.

In the grinding work of it all, I dreamed about the mile-long section of unclimbed steep wall to our right and imagined climbing it ground-up without fixed lines. It seemed very likely that attempts in that “pure” style would have fizzled in the oppressive heat, in dead-end holds or in broken crimps under bodyweight hooks, but still I dreamed about the unknown on the sharp end that is only possible in that style of first ascents. For this route, though, we decided to assess the wall from above and build the best route possible with the additional knowledge we would have from a fixed-line preview. In my mind, both styles have their place, although they yield entirely different results. Ironically, the ethically “inferior” style of rappelling and previewing generally produces a more enjoyable route for future parties, while the “superior” style of ground-up can often leave infamous routes that grow cobwebs even as their mythical origin celebrates them. Since Kenya, I’ve done new routes in both styles. I think the decision-making process that takes place at that fork in the road (to start at the base or the top) isn’t black and white, and the debate is best held over a few cold Kenyan Tuskers. We need both styles for climbing to be accessible while giving us routes to dream about. By the time we finished the climb, I had taken thousands of images – of sunrises, sunsets and birds gliding; of Kate dancing up intricate steep pockets and Brittany jumping all-out from a thumb press; of scooping water from the muddy bottom of Ololokwe’s springs and of the moon rising as we hiked back to camp at the end of a long day. Kate and Brittany helped me get the images to the right people at Patagonia.

After the trip, I went back to work as a park ranger in Yosemite. I remember making the 100-yard walk from my office to the stone-and-beam post office in the center of the village. I knelt down on the tiled linoleum floor in my Park Service–green polyester pants and spun the gold combination dial on the tiny door to my P.O. Box. Inside, a worn and reused yellow note indicated a package had arrived. I took the slip of paper to the window where John (one of the nicest men in the world) collected a thick mailer for me. A handwritten letter from the head photo editor at the time, Jane Sievert, thanked me for my image. Flipping open the matte pages of the September 17 catalog to the center spread, I remembered the heat, the texture of the rock, the camel’s slow step and the feeling of gratitude and awe watching the world bump by as JT gripped the steering wheel and drove us back to Nairobi, my camera perched above the open window trying to freeze a thousand moments in time.

Eric Bissell
After a decade working as a climbing ranger
in Yosemite National Park, Eric Bissell now works at the
intersection of public lands and recreation through
media and climbing.