A story of a customer whose photo ended up in our catalogue.

Julie Galton hadn’t been to a Patagonia store in years when she realised she needed some new Baggies™ for her upcoming summer trip to the Colorado River with her son. But when she went to Patagonia.com to grab a few pairs, she was unexpectedly greeted by a familiar face. Hers. It was the only face not covered in mud in a photo that first appeared in the 1984 Fall catalogue. She had not seen the photo in 35 years.

First, she called her kids. Then, Patagonia customer service. When she told them she was the woman in the photo on the homepage, they couldn’t contain their excitement—and questions. What was the story behind it? Why were they all covered in mud? How did all those Baggies look so clean? It was on that phone call that she learned the photo was displayed in stores all over the world, including life-sized versions of it with their faces cut out to serve as a photo booth. It had taken on a life of its own. But there was more to the photo than a muddy moment by the river. And it started with a love story.

“We all wore Baggies like it was our uniform,” she says. “They were the most useful thing you could have on the river.”

Julie went to the Grand Canyon for the first time in 1981. She had just graduated from college, and spent the summer as a park naturalist. “I met the man in the far right of the photo in the blue hat—the head boatman—and we fell in love. I was 21.” She continued to go back and raft with him for several years, including the year the photo was taken in 1983. 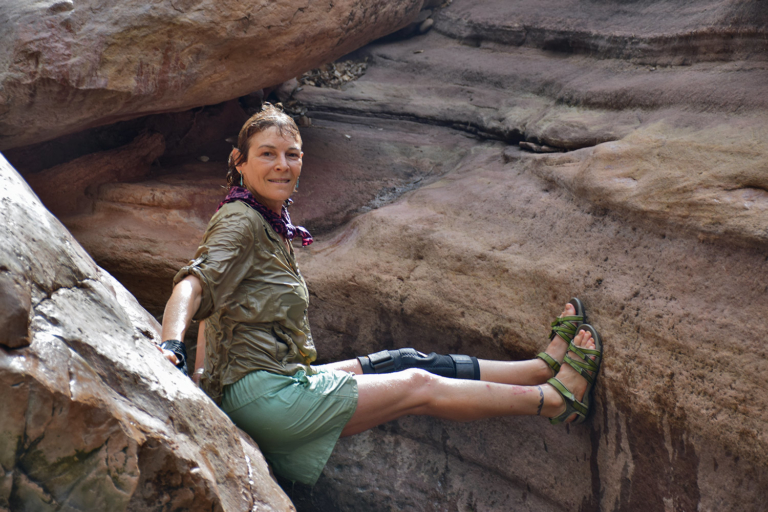 Deer Creek, Grand Canyon is an idyllic tributary of the Colorado River, with lots of narrow, sinuous spots to play. Photo: Danny Gale.

The photograph was shot by Chris Brown, a river guide with Arizona Raft Adventures, the summer Julie spent six months living by the river, studying the effects of the reclamation of Glen Canyon Dam for the National Park Service and U.S. Geological Survey. A year prior, in 1982, the river almost took out the dam after a heavy snowfall and rapid snowmelt. They were collecting data at a very exciting time when flows were coming through the dam that no one had ever seen before. They’d go downstream on a raft, work at a site for 10 days, then get back on a raft, and move on to the next one. It took 55 days to do the whole circuit, they were off for five, and then they’d do it again. “I was in my 20s, and I could do things like that,” she says cheerfully, having just returned from her last canyon adventure only months before.

But it wasn’t all work and no play. So when they came upon a beautiful stretch of mud flats, it seemed only natural to cover themselves head to toe with the squishy mud. When the group realised they were all wearing Baggies, they washed off their bottoms and gathered together, paddles in hand, for the epic shot. “We all wore Baggies like it was our uniform,” she says. “They were the most useful thing you could have on the river.”

Like the river, life takes its twists and turns, so Julie and The Boatman didn’t stay together. But the canyon did keep calling her back, and today she continues to raft there as often as she can—always with her Baggies. Now a psychologist in private practice in Oakton, Virginia, she still feels called back to the river, and plans to keep going back for as long as she can. “It’s the one place in the world where I feel most myself,” she says. “I could wake up every morning and every day and just go downstream and be perfectly happy.”

Banner image – From the Fall 1984 catalogue, Julie Galton and friends show off their brightly colored Baggies after rolling around in a patch of mud by the Colorado River. Photo: Chris Brown.

Rachel G. Horn
Rachel G. Horn is a writer and editor at Patagonia.
Her writing has been published in Popular Science,
Men’s Health, Shape, and Fitness. She spends most
of her free time in the ocean swimming and freediving
in the Santa Barbara Channel.